This time, my new post is not about Computer Science, but it is about a song and a man.

It will be better if you are listening to the song when you are reading the page:)

Recently, when I was listening to douban FM, I found a very interesting song named “Guantanamera”, which begins with a man telling a story about another man called Jose Martin. The song is really in a amazing rhythm which I liked so much. But what makes me more curious about is who is Jose Martin? And did he has any special story?

So I began my journey to find the story about this “Jose Martin”. And it turns out to be a worthwhile journey.

Firstly, I did some dictation of the man’s words.

“Jose Marti was born in 1863.When he was 17 years old, he was active in the Cuba liberation movement, and he was exiled by the Spanish governor. He spent most of his life in exile, including 12 years in New York city, he wrote 70 books, poetry, novels, polemics.He was one of the greatest writer in the Spanish language. At the age of 42, he went back to Cuba,this is one of his last poem, because he was killed within a years, in a uprising.After he died, people put it into a popular tune.

The words mean, I am a truthful man from the land of palm tree. And before dying I want to share these poem of my soul. My poems are soft green. My poems are also flaming. My poems are like a wounding farmer, seeking refuge in the forest. The last I will said, cant lost … with the poor people in this earth, I want to share my fate. The streams of the mountain please me more than the sea.”

wow, kind of man of story, isn’t him?

Then I go to wikipedia for further detail of this man. 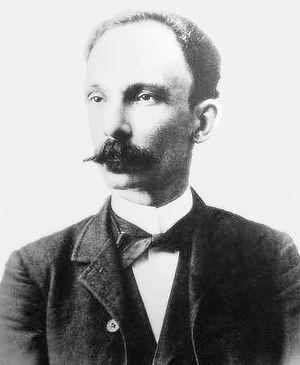 And after reading his story, I got some further understanding of the song

And I gonna to put the Chinese version of the lyric here.

Referring to the experience of Jose Marti, the poem shown both his love for his motherland and his pursuit for liberation.

While the story of the singer of the song is also very interesting.

The singer’s name is Pete Seeger, one of the most famous folksinger in American history, who is also famous for being a activist acting against war.

Pete Seeger shared the same value of peace and liberation with Jose Marti, so he adopted Jose Marti’s last poem into the song “Guantanamera” in honor to this legendary man.

Also, does the name of the song “Guantanamera” makes you think of something else?

So does the word Guantanamera has anything to do with  Guantánamo Bay?

Actually, Guantanamera is the female form of  Guantánamo in Spanish, which means the girl from  Guantánamo.

Who will know a song that in such a happy rhythm has so much story to tell:)